About Billing Boats: Mr. Ejnar Billing, a Dane who fought with the RAF during WWII, was working as an architect in the town of Esbjerg, Denmark when his wife, who owned a hobby shop asked him to make a model boat for the front window. Mr. Billing made a “scratch” build-up model of a Danish fishing boat that caught the attention of a Danish magazine. The beautiful boat displayed in the window was thought to be perfect for an upcoming competition in the magazine, and the company asked for 50 of the build-up boats.

Mr. Billing was keen on the idea, but the prospect of building so many of these boats was daunting to say the least. He came up with a novel concept; Make the models as a kit, exactly the same way you’d build a real boat. “Plank-on-Frame” was the method used and his invention is used by model boat manufactures all over the world to this day.  In 1958 Billing Boats was born and it is known around the world as the first and finest model boat kit manufacturer!

Over the years innovations were added to make model boat kits and model sailing ships more accessible and enjoyable to the widest range of boat and hobby enthusiasts. Frames were pre-cut, laser cut wood for easier builds, even ABS hulls were added to make the kits and radio control kits for even more fun!

Today, over 50 years from Billing Boats humble beginning, innovation and customer satisfaction are as important as it was for Mr. Billing. Kent (son of the founder) and his wife Rikke Dolleris Billing now run the company from the Kolding, Denmark world headquarters. To enhance service and increase the market presence in North America, Billing Boats USA, Inc. was formed. Our future looks bright and we look forward to meeting the next generation of model boat builders! 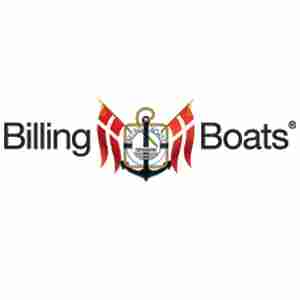